Far from Earth, close to the Universe

One month after its launch from the base in Kourou, French Guiana, the James Webb Space Telescope, carried by an Ariane 5 rocket, reached its observation point 1.5 million kilometres from Earth. Now the telescope is located in an area called the second Lagrange point (L2), where the influences of the Earth, Moon and Sun counterbalance each other, and it has begun a lengthy phase of aligning optical instruments to be able to start its scientific mission.

Named after James Webb, the second administrator of the National Aeronautics and Space Administration (NASA) during the Gemini, Mercury and Apollo programmes, the James Webb Space Telescope (JWST) will revolutionise our knowledge of the Universe. The visionary project of NASA, the European Space Agency (ESA) and the Canadian Space Agency (CSA) is looking beyond human imagination, to reveal to us what is hidden in the remote abysses of the Universe.

It is a crucial mission – the study of the Universe’s evolution – that has been entrusted to the mirrors, lenses and spectrographs of the JWST, the successor of the Hubble telescope, which has been collecting data and precious information on the entire Universe for the past 30 years. 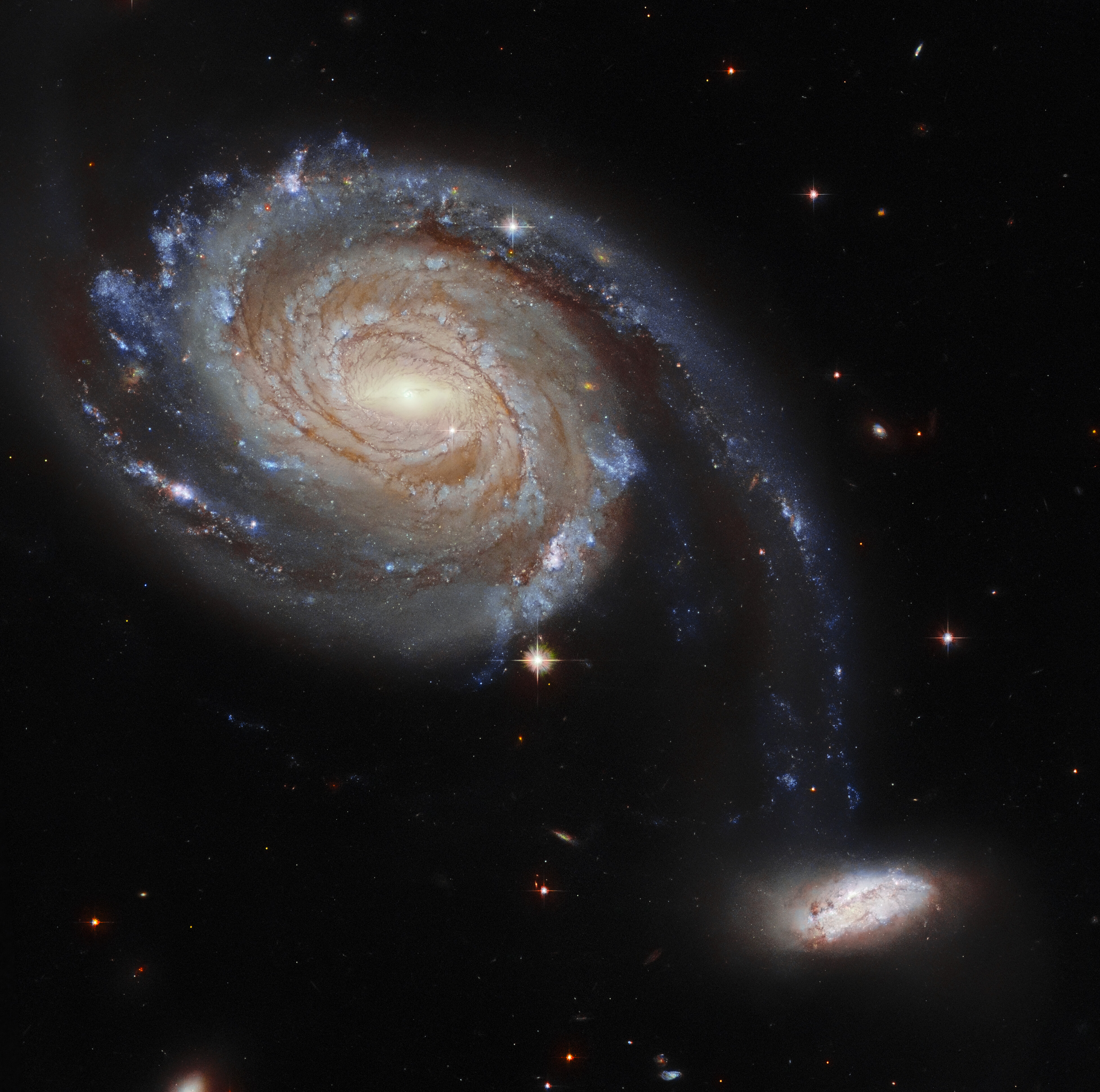 The eye that observes the Universe

The JWST was designed to provide answers to unresolved questions about the Universe and to make revolutionary discoveries in all fields of astronomy. It is a gem of engineering and technology, equipped with the largest astronomical mirror that has ever flown in space, new sophisticated scientific instruments and a sunshield as large as a tennis court. 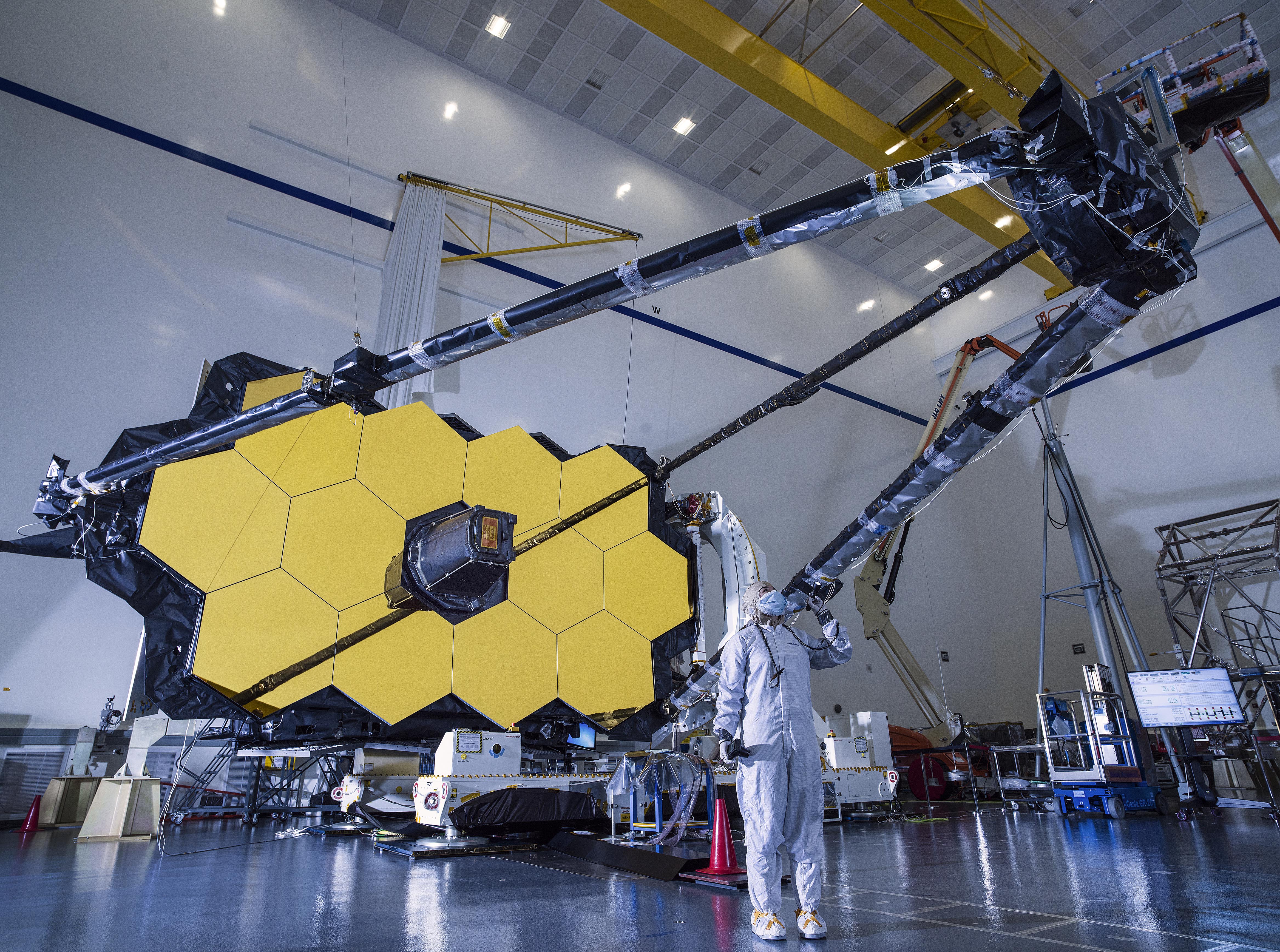 In deep space, where there are no borders and everything disappears into the infinite, there is a need for an acute, precise view. In a task such as the one entrusted to the JWST telescope, everything depends on its ability to see, which is determined by a system of mirrors that exchange the image between each other.

There is a primary, concave mirror which is 6.5 metres in diameter, made up of 18 hexagonal segments of gold-plated beryllium. A secondary mirror, to which the primary mirror converges the reflection of the signals, then sends them to a third mirror placed in the core structure, where the optics chamber and spectrographs are located. The image is then stabilised by a fourth mirror before it reaches the lenses of the optics chamber that will capture the image.

Scanning in the dark to capture the invisible

The eye of the JWST will scan the most remote corners of space, searching around in the midst of galaxies so far away that perhaps they are just the final glow of a memory, exploring the early stages of the Universe 13 billion years ago, only a few hundred million years following the Big Bang. The more the Universe expands, the more the light signals become slow and precious. The spectrographs of the JWST were designed to observe infrared signals billions of light years away and to process their complex information.

Leonardo contributed to this extraordinary telescope by providing key elements of a crucial instrument – the Near-Infrared Spectrograph (NIRSpec), the infrared image spectrograph for which ESA is responsible.

For this component Leonardo built a sophisticated, high-precision cryogenic mechanism, known as the Refocusing Mechanism Assembly (RMA). Developed to bring the camera perfectly into focus in orbit, the RMA will guarantee the NIRSpec a high quality image while working at -234°C and moving its two mirrors – also designed and built by Leonardo – one hundredth of a millimetre at a time over a distance of only six millimetres.

Building a mechanism to deliver the required performance demanded extremely challenging processes. In particular, the mirrors of the RMA were made with an extremely precise polishing process at the Leonardo Campi Bisenzio (Florence) plant and afterwards underwent a final ‘optical grinding’ machining process at the laboratories of INAF – Brera Astronomic Observatory in Merate (Lecco). This ensured that the shape achieved by the optical surfaces would not differ by more than a few tenths of atoms from the one suggested by models and simulations.

Balanced between the stars

When looking at the James Webb Telescope, it resembles origami. Skilfully folded back on itself, it progressively unfolded its components from launch until it reached the Lagrange point 2 (L2) orbit, to then begin its delicate task of observing, and above all, of protecting itself from the heat of the sun.

Precisely like a swan made of paper, the JWST is as precious a gem as it is delicate. High levels of exposure to light and heat would risk interfering with the telescope’s systems and would jeopardise the quality of its observation. At the same time, nevertheless, the telescope needs sunlight to obtain the energy it needs to operate.

To stay shielded from the sun, the JWST is equipped with a system of five layers made of a special material, kapton, which reflects sunlight. This minimises heat absorption and at the same time the telescope’s energy reserves are recharged. 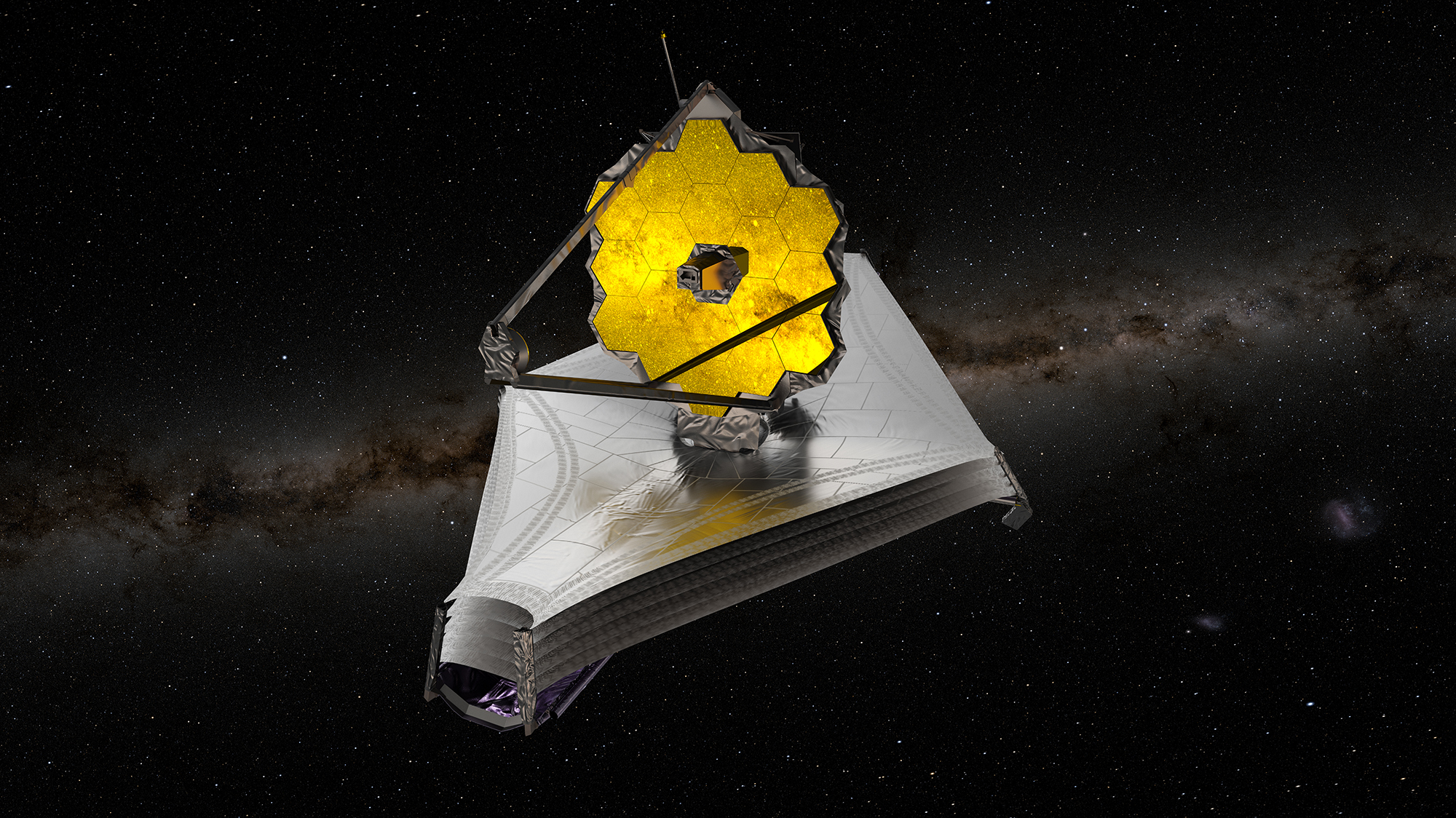 Leonardo cooperated with NASA, ESA and CSA by developing three star trackers (Autonomous Star tracker – A-STR) and two ‘sun sensors’ (Smart Sun Sensor – SSS), which are key components of the Attitude Control Subsystem (ACS) of the JWST. The SSS switches on automatically during the launch and ascent stage, and is the main sensor used during the launch vehicle’s separation. It provides essential attitude data to guarantee the integrity and safety of the JWST, even in the case of abnormal situations.

attitude sensors produced and delivered since the ‘70s

international space programmes get their bearings with Leonardo sensors

stars stored in the memory of a star tracker sensor

times per second that the space probe’s bearing is calculated

In contrast, the A-STR units become activated shortly after the launch vehicle’s separation and use the stars to collect attitude data. The A-STRs supply these data during mid-course correction manoeuvres to ensure that the JWST arrives at the operational orbit over a million kilometres away from Earth. Lastly, the proper trim determined by the A-STR supports the telescope’s systems to provide stability and tracking accuracy, which are necessary for space observation. 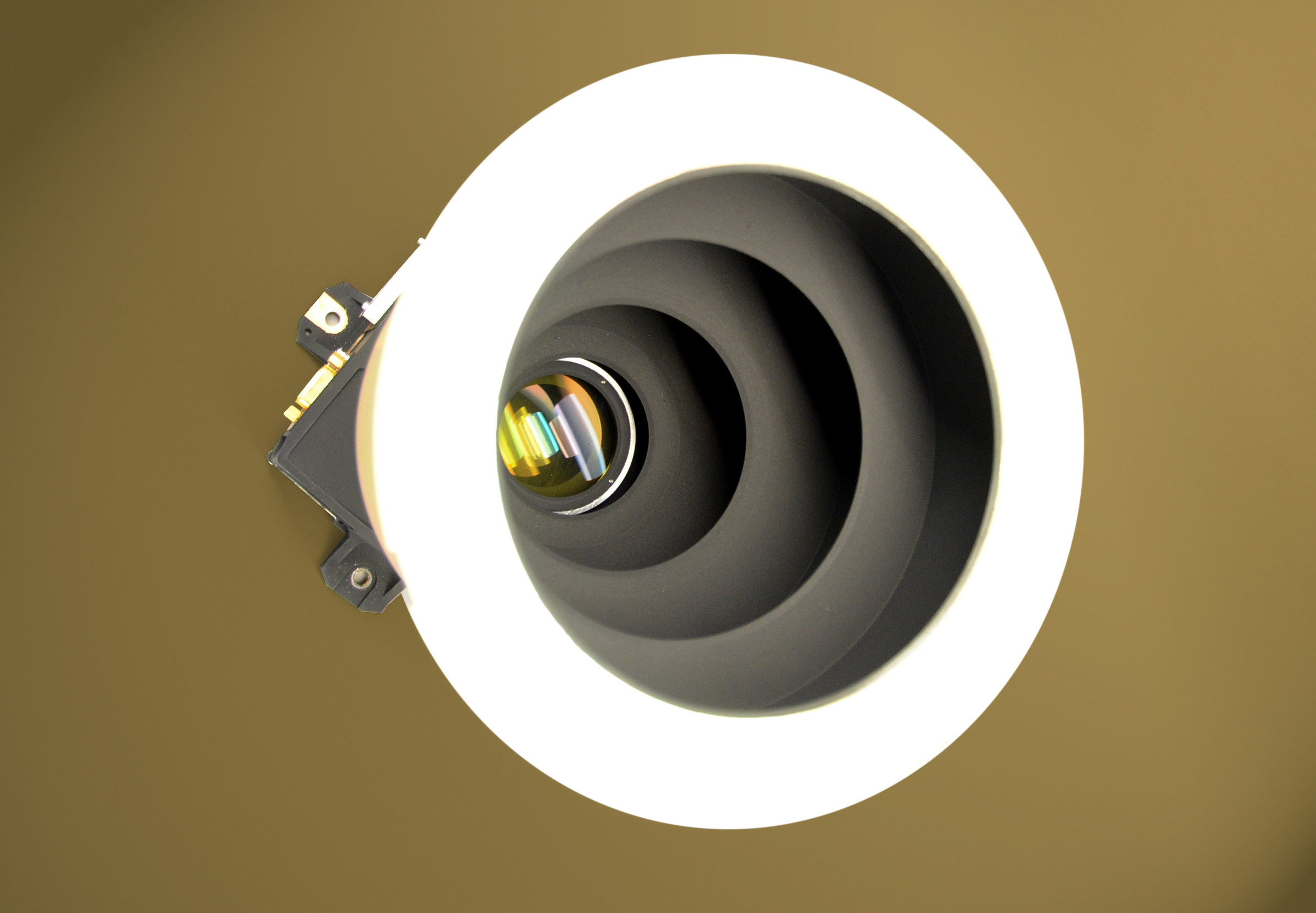 While James Webb will keep its eye fixed on a dark horizon, we will continue to gaze skywards  waiting for new amazing information to revolutionise what we know about the birth of the Universe.